Debates over which programming language is the best are very popular in software development services. Most of these comparisons favors one language over the other. Not this one. We wanted to compare C++ vs. Python and stay fully neutral to both of these languages.

We’ll focus on pros and cons of both of these languages and show you exactly when each language is better that the other.

C++ is an offshoot of C language that was created by Bjarne Stroustrup in 1983. The purpose for it was to implement object-oriented programming into C language. It is implemented as a compiled language which makes it very fast and great for advanced applications.

C/C++ is a language that is often used for operating systems as well as dedicated applications for hardware platforms.

Python is a high-level programming language released in 1991 by Guido van Rossum. It was created to be easy to read and program in. Because it’s an interpreted language, it’s mostly used for smaller projects like MVPs and proofs of concept. Also because of many mathematical libraries Python is great for data analysis.

One of its best advantages is a great standard library that allows performing many tasks in a very easy way.

A fun fact about Python is that its name comes from Monty Python – an amazing British comedy group. 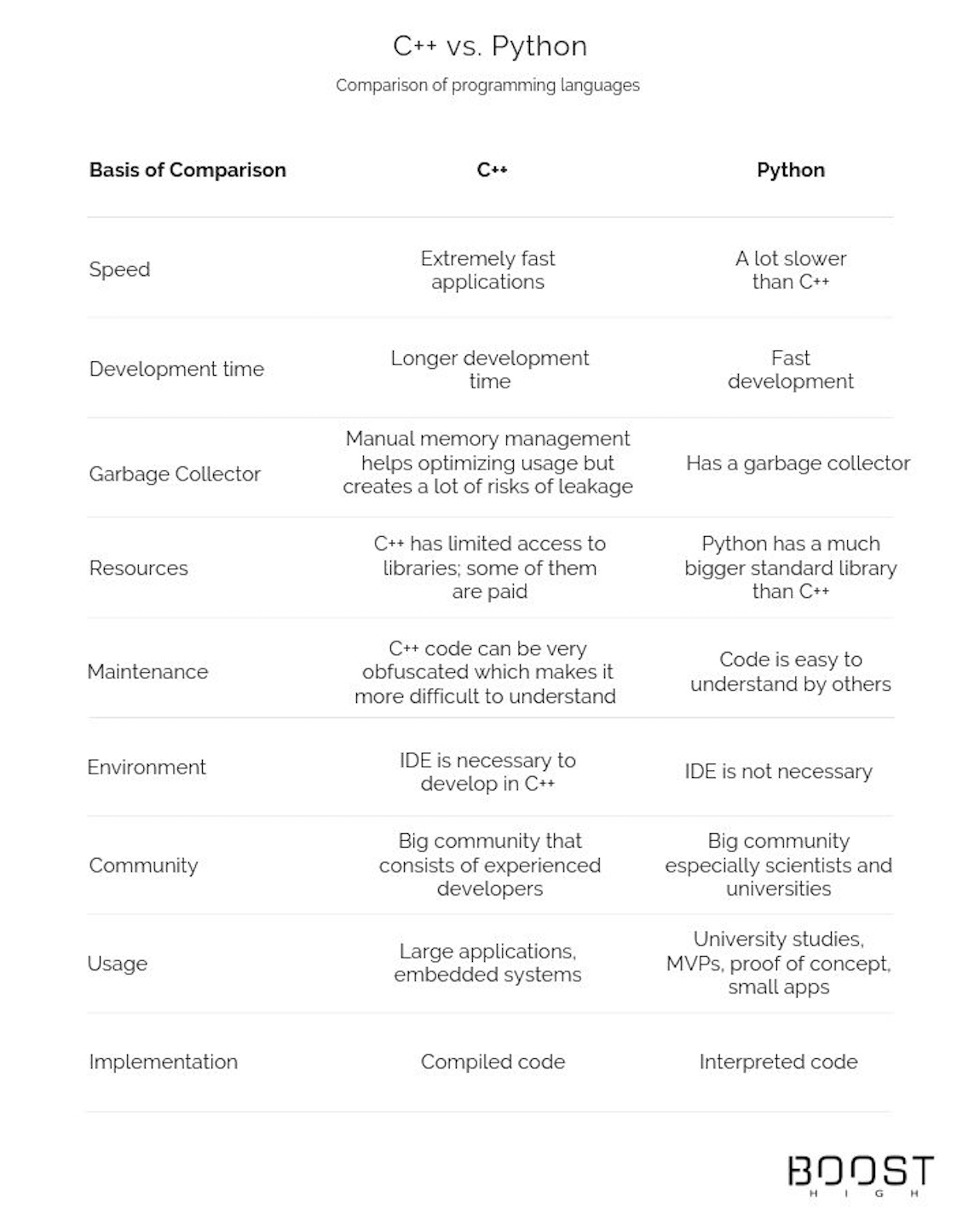 Popularity of both of these languages have a lot in common with their complexity. Because Python is considered to be a very easy language for beginners, it’s also very popular.

On the other hand, even though C++ is definitely more difficult, there’s plenty of projects that simply need it.

Developers Report from 2019 made by Stack Overflow includes a research about the most popular languages amongst developers. Below you can see the results. As you can see Python is definitely higher in ranking than C++ which makes a lot of sense since it’s so easy to program in. However, C++ still had 23.5% of votes which is a lot considering how difficult it is. 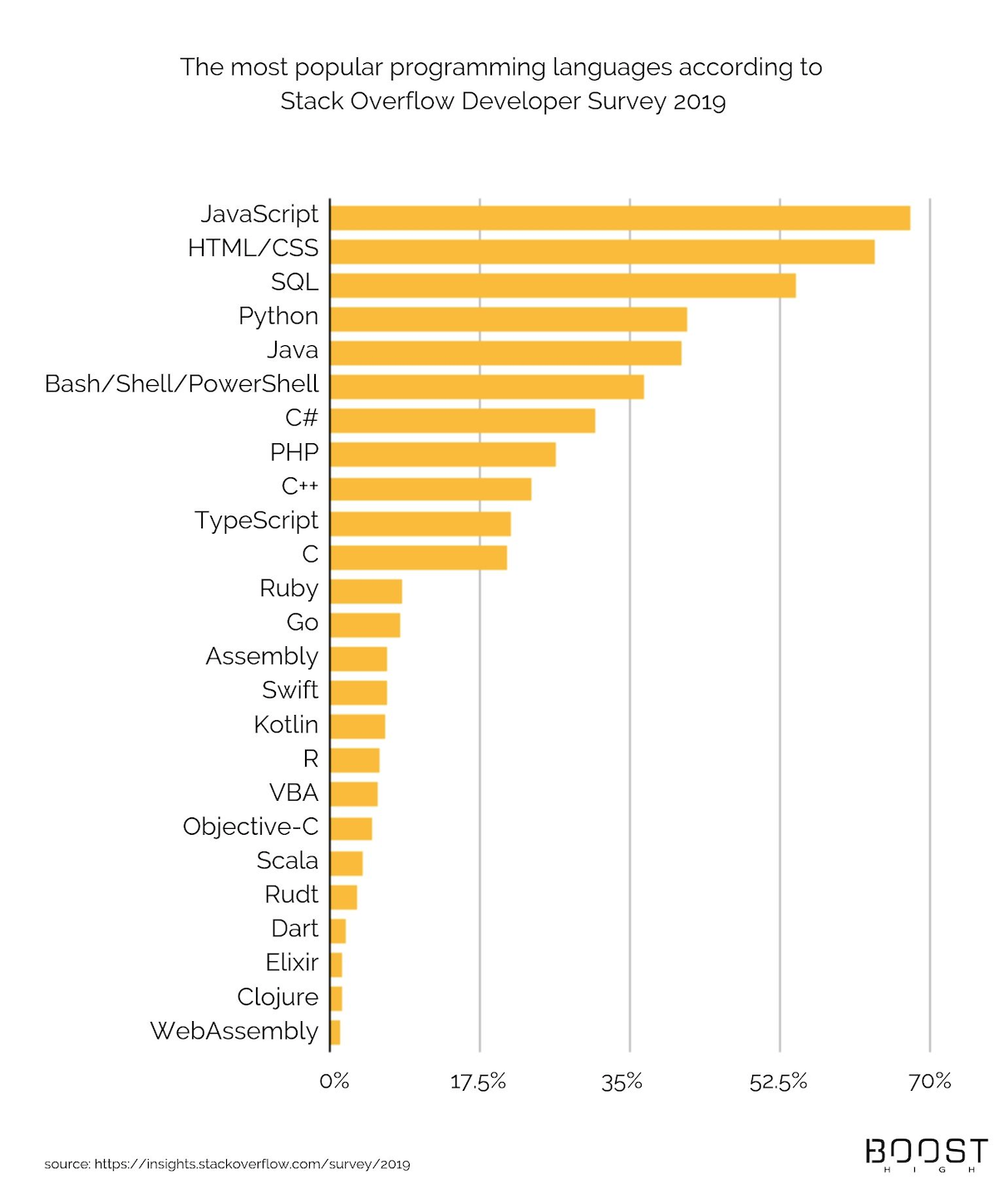 As we know this type of rankings are often very different from each other despite being about the same thing. That’s why below you can see another ranking of languages from Spectrum.

This category has only one winner. There’s absolutely no doubts that when comparing C++ vs. Python – C++ is much faster than Python.

While searching for some useful informations for this article, I found an interesting comparison made by Niklas Heer. He posted his results of the test on github where he showed how each of the languages handles floating point operations.  The results showed that C++ needed 9.5ms where Python 3 (pypy) used 41ms and Python 3 (CPython) as much as 243.5ms.

This test proves how much faster C++ actually is

C++ is known (and hated) for its pointers. Let me explain what I mean. C++ can be extremely well optimized in terms of resource usage thanks to so called pointers. They allow memory management which is great for hardware platforms with very limited capabilities. However, they’re also really tricky. When creating objects developers have to remember about closing them after finished task to prevent memory leakage.

On the other hand, Python doesn’t have pointers at all. There’s no way to manage how much of a memory each object is going to use. It’s stability depends on used libraries and often not the application itself.

As I mentioned before, C++ is a compiled language which means that the whole code is being compiled to C, then from C to machine code. Once it’s compiled, the processor can understand the whole app.

Python on the other hand is an interpreted language which means that every time you want to start the application, there needs to be a Python interpreter installed in the right version.

The difficulty of each languages often depends no only on the complexity of the syntax but also the amount of resources available for it.

For instance, when it comes to C++ there’s many paid libraries. Moreover, most of the times they need to be edited a lot to fit the requirements. Often C++ is even used to write libraries dedicated for specific hardware platform.

Python, unlike C++, has a lot of libraries that pretty much work without issues. However, because there’s 2 versions of Python, they need to be chosen for the right version.

Applications written in C++ have a lot more code, programming paradigms and other functions that make the code difficult to read and understand. It can take some time for a developer to understand the app if he’s not the one who wrote it.

Fun fact about C language – since 1984 there’s an International Obfuscated C Code Contest (IOCCC) where developers participate by trying to write the most obfuscated code. The contest was created to show how C compilers work and how “not to” write in C.

Below you can see the winner from 1998. It’s a flight simulator that allows you to ‘flight’ over Pittsburgh. 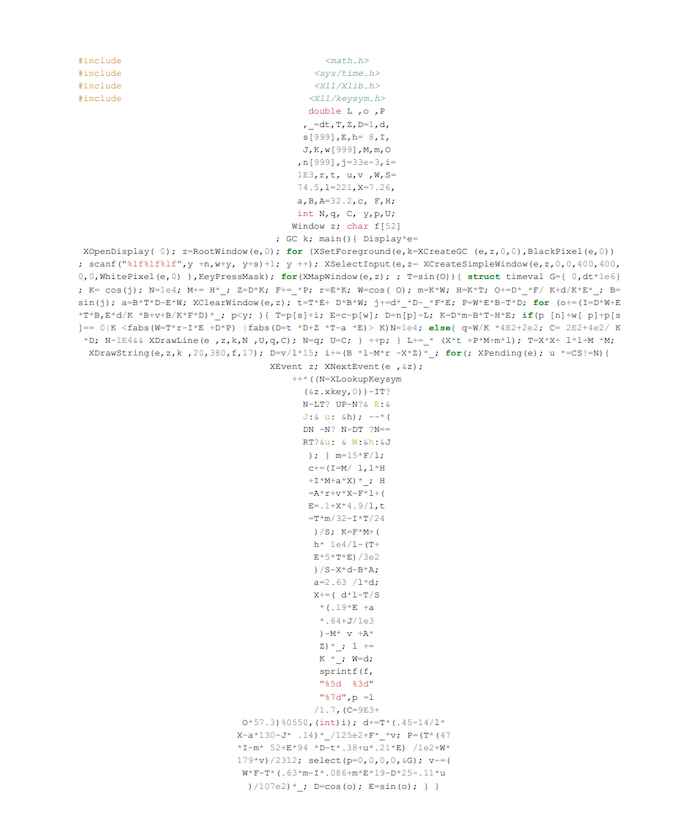 We compiled the code and this is what flight simulator looks like:

When writing in Python you don’t really need any special software application to do it in. If there’s an error, interpreter will catch it and show you exactly where the error occurs.

In C++ on the other hand, you’re going to need Integrated Development Environment (IDE). Because developing in this language is so complex, it’s pretty much necessary to develop advanced applications. You’re also going to need debugger to see what type of an error there is.

Both of languages have a large support from their communities. However, there’s a big difference in the type of people you can find there.

Because C++ is used for so many advanced projects, community consists of many experienced developers. It helps with researching for different solutions. However, because C++ is compiled it’s not as easy as getting a source code.

Python on the other hand has a large support from university community. Many scientists use it for their work and their thesis. Also because Python is an interpreted language some modules can be simply added to the project by copying it from github.

Moreover, if there’s a need to optimize a system – C++ is great for it. Its ability to really communicate with processor helps the application to minimize its usage.

One of our clients needed their Video Surveillance System to be optimized without changing hardware platform. An old version could only operate on 12 IP cameras where there was a need for much more.

To optimize the system our team used C++ and was able to maximize the performance up to 32 IP cameras. Because it was a dedicated application for a specific hardware platform C++ was simply much better than Python.

When To Choose Python?

When it comes to Python, as I mentioned it’s widely popular when developing Minimum Viable Product or proof of concept. It’s also really good for smaller applications.

Another thing that Python is great for are data analysis which makes it really popular amongst university communities.

Most of Artificial Intelligence frameworks is also written in Python.

When you mostly care about fast and easy development and your application is fairly easy to write – choose Python.

Recently we’ve been working on a digital mirror for a company to present at a trade fair. The task was to connect 2 tv monitors to a camera and detect the objects on the video. The video can have different filters and lenses added to change what’s being displayed on this digital mirror. It’s just like Instagram or Snapchat filters and lenses but on 2 55” tv monitors.

Our team has been working on this project and tested two possible options: C++ vs. Python. For this specific case, Python turned out to be better. Why?

Pure Python is a lot slower than C++, however, we needed to work on arrays. And for that, we chose NumPy library. NumPy is a lot faster and perfect for this type of project because it supports very difficult mathematical functions and calculations.

Choosing C++ in this case would add a lot of extra development time and this project was purely focused on creating MVP. However, on a later stage of development there’s a possibility of rewriting code to C++ to optimize the performance.

C++ vs. Python has no winner because they’re both great for different projects. One is doing sprints when the other is running marathon. We hope you can understand both of these languages better after this article. If you have any questions, feel free to contact us.

Choosing the right language for your project is very important as we all know. If you have doubts and want to hear more opinions about your specific case, don’t hesitate to contact specialists.

How To Speed Up Your Device Using Multithreading