When it comes to choosing the right framework for your project, it can get tricky. This decision alone can impact the finish result of the project. It can be either a success or a failure and it’s up to you how it ends. Both Angular and VueJS are great frameworks that can be used to create big projects. They also have their disadvantages that can result in various different problems along the way. So which framework to choose?

Angular is an open source framework that allows developers creating front-ends on the highest level of advancement. This framework is supported by Google and is continuously updated not only by them but also community that grew to a very large scale over the years. This has definitely helped Angular to reach the level of popularity it has now. It has a lot of pre-made modules ready to use without the need of having to write them yourself. On GitHub.com you can see that Angular received over 11.000 pull requests. It shows that its community is really active and rapidly growing. Using less popular framework creates a risk of having to deal with problems on your own. Using Angular gives you a sense of security in that matter. It is used by huge enterprises like PayPal, Sony and Weather, which obviously gives a lot of credibility to this framework. Angular’s gathered over 44.000 stars on GitHub.com and the first version AngularJS has over 59.000 stars, which gives total of over 103.000 stars since the beginning of its existence.

Vue.js on the other hand is a JavaScript based framework designed by Evan You, a former Google developer. Vue officially launched in February of 2014. Since then it’s gathered a big amount of supporters, mainly because of its simplicity. Over the course of its existence, Vue has collected more than 125.000 stars on GitHub.com. It outruns Angular and AngularJS both combined. At the same time Vue.js has received only a little bit over 1.300 pull request, which places it far behind in comparison to Angular. 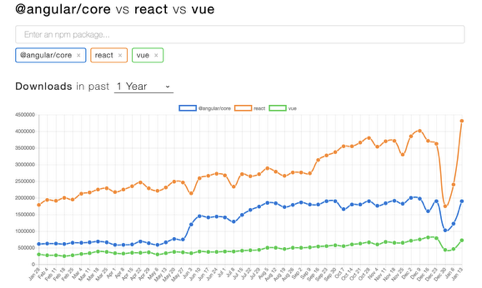 Let’s start with 5 top advantages, that BoostHigh believes, are the best features of Angular.

Even though, these pros were pretty impressive, there’s no such a thing as perfect framework. Below you can find out 5 cons of this framework.

Now it’s time to look into Vue.js. Is this as good as Angular? Or maybe even better? Let’s find out.

Let’s not forget that there are cons to every framework, so below you and find what we think are the biggest disadvantages of Vue.js.

So you can understand it better, below you can find an example how we decided which framework we’re going to choose. BoostHigh has been working on a Ticket Machine for Public Transport Company. This project required both embedded software and a web system. Our developers decided to use Angular as their framework of choice for creating a front-end for this project. System required a lot of advanced modules that were easier and faster to make using Angular, since it already has most of needed modules implemented. Using Angular allowed them to achieve the highest level of advancement while maintaining good standards of coding thanks to TypeScript usage.

Both, Angular and Vue.js are extremely good frameworks that can help you finalize some big projects but you have to remember that it is crucial to choose the right one. Usually, Angular works better with bigger projects, that requires a lot of tools. On the other hand, Vue.js is perfect for single page sites. It’s up to you to decide which one will perform better as the finish product. If you’re still not sure, which one is better for you, don’t hesitate to ask us for an opinion. Our experts will advise you and help you in getting your project to fruition.

JavaScript Development – Why Choose JavaScript Over Other Languages?